Statement of Moral Outrage at Police Violence and Systemic Racism 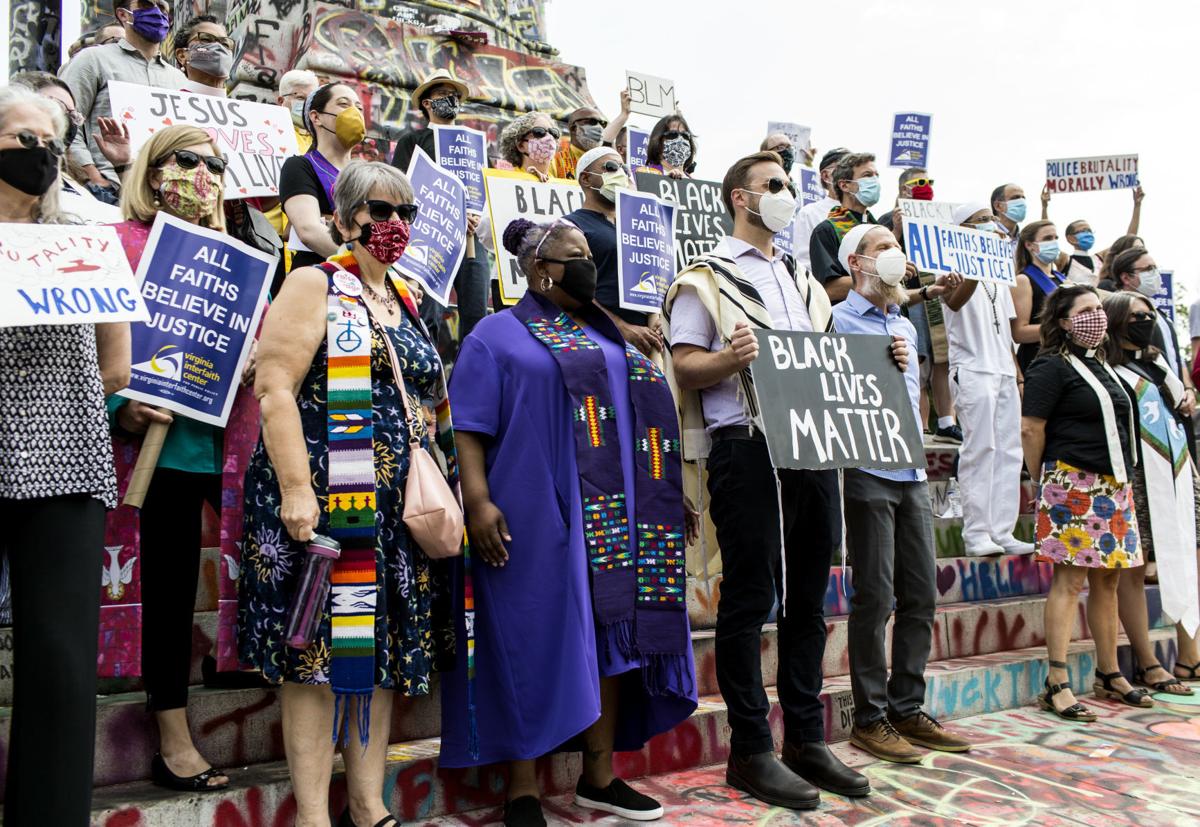 On June 30, 2020, a group of about 60 Richmond-area clergy representing many faiths, now known as Clergy Action RVA, gathered at Marcus David Peters Circle (formerly known as the Robert E. Lee Monument) to demand an end to police violence against racial justice protesters and action on an anti-racist agenda. You can read more about the gathering here and here. Below are my remarks:

Good afternoon. My name is Michael Knopf, and I am the rabbi of Temple Beth-El here in Richmond.

Scripture teaches that every human being is created in God’s image, that we are all equal in value and infinite in dignity. For this reason, my faith insists that Black Lives Matter, that racism and social inequity are an affront to God, and that we therefore have an urgent moral duty and a fundamental spiritual obligation to root out bigotry, dismantle oppression, and build a just society.

So when people of color continue to be discriminated against and oppressed in the so-called “land of the free and the home of the brave,” when a person’s skin color dictates their income and life expectancy in a country that purportedly believes all “are created equal;” when black and brown people are harassed, hurt, and murdered time and time again by those sworn to serve and protect them; and when nonviolent civilians gathering to protest racial injustice are met by militarized police, tear gas, and rubber bullets — people of faith and people of conscience are right to be outraged. Indeed, my faith affirms that in this moment God is outraged — outraged at having to witness the ongoing degradation and destruction of God’s children, outraged at the wanton desecration of the Divine image, day after painful day.

We are here today because we believe that protesting racism and systemic injustice is sacred and fiercely urgent work, commanded by faith and conscience and protected by our country’s Constitution.

And we therefore cannot stand idly by as our holy siblings who are exercising their constitutional rights and living out their moral responsibilities are met by indiscriminate, horrific, and in some cases deadly police violence.

Police officers must know that when they hurt one of our people, they are hurting a child of God. Nothing short of a clear and present threat to their own safety gives them the right to desecrate or destroy a manifestation of the Divine image.

And now let me also say unequivocally to all who have been on the streets day after day, night after night, and all who are part of this movement demanding that justice well up like water, and righteousness like a mighty stream: We share your outrage. We echo your anger. We stand with you, and we pledge to fight alongside you — yesterday, today, and tomorrow.

But the question before us is not whether our indignation is righteous. We know that it is. We know that our cause is just, and that our anger is outmatched only by God’s. We know that this unjust aggression by state and local authorities against the people they are charged to protect reveals the ugly and painful reality of racism in our city. We know that police violence against protestors in recent weeks has exposed the reality that communities of color are over-policed but otherwise underfunded. Yes, we know our outrage is justified.

The answers to these questions are unfortunately not hard to find. And yet many of us, especially those of us who are white, continue to stand in defense of this immoral and intolerable status quo. Still others of us find it all too easy to avert our eyes from the unjust acts of state violence that are perpetrated in our name and with our tax dollars, from the pervasive inequities enshrined in the laws that govern us. We are in a state of moral emergency. And yet too many of us stand idly by the blood of our neighbors and remain indifferent to the suffering of our brothers and sisters.

So let us also be clear about this: the police, along with all of our elected officials, represent us and are accountable to us. Which means that we are all of us ultimately responsible. When they are hurting people with impunity, it is because not enough of us are demanding that they stop, just as racial inequities persist in our city and country because too few of us are insisting upon a change. Power always interprets silence as support, and power gives up nothing without a demand. As Holocaust survivor Elie Wiesel pointed out in his Nobel prize acceptance speech: “We must always take sides. Neutrality helps the oppressor, never the victim. Silence encourages the tormentor, never the tormented.”

We have the power to challenge our own – and our society’s – bigotry. We have the power to protest unjust and immoral laws, to advocate for better ones, and to vote for the leaders who make and sign our laws. State and city police may be guilty of perpetrating violence against innocent civilians. But we are all responsible.

So to the people of Richmond: understand that we signal our priorities and beliefs as strongly through silence as through speech, and we are accountable either way — to God most of all. As the great 20th century sage Rabbi Abraham Joshua Heschel put it: This is no time for neutrality. This is an hour of moral emergency that calls for “high moral grandeur and spiritual audacity.”

And to our holy siblings who are putting their bodies on the line to protest injustice: be strong and courageous. Know that people of conscience stand in solidarity with you and pledge to fight alongside you.

Forward together. Not one step back.